Way back in 1994, Anvil magazine ran a series of preview articles for Leviathan with a selection of short stories, concept art and background. 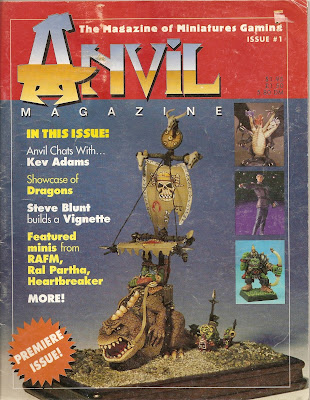 Looking at the cover, I'm struck by the style of the Orcish warbeast with it's mighty banner, trendy shade and the herd of tiny goblins trailing after it.

Next up, there's The Shaman's Tale, a short story that covers the world of Leviathan and the fate that befell the civilisations that once flourished in it. 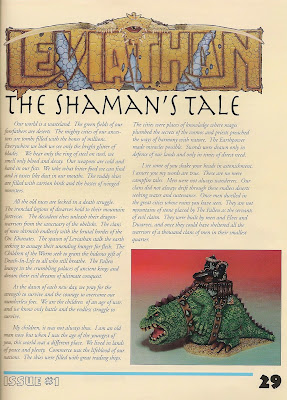 I must admit that Anvil Magazine totally passed me by and it's only been recently that I've managed to source some copies of it myself. It's interesting to see that even at this early stage of it's development, Leviathan was very different from your typical fantasy fare.

Gone were the Tolkienesque Western European medieval setting and in its place is a grimy fascinating world where civilisation has failed and the apocalypse has come and gone and the survivors must fight to survive amongst the ruins of a world gone quite literally to hell. 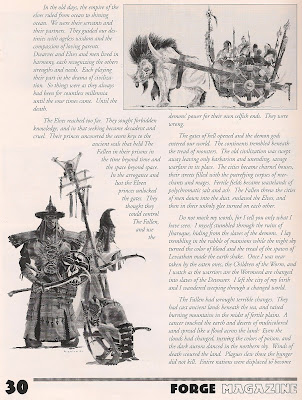 Even the artwork was new and different, with ex GW artist Adrian Smith creating some really fantastic concepts with savage punk barbarians, vaguely oriental Goblins and steampunk Dwarves (decades before the style became the norm for the stunties).

Looking at the concept now, I find myself wondering what Leviathan could have been if the company that created it hadn't changed hands repeatedly and Leviathan disappeared into the mists of time.

I've tried to track down anyone who worked on the game to see if they have any memories of the development of the game or any of the concepts that they were working on for the supplement, Earthpower. Sadly, I've not had much luck as all the material they had was lost on an old PC but apparently the original concept for Leviathan was that it was going to be a skirmish game with small warbands with the odd monster rather than the mass battle game it became. 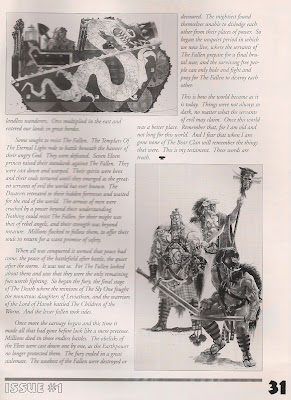 The second article to turn up in Anvil was a sketch gallery which also gives a sneak preview of what the game was going to be like. 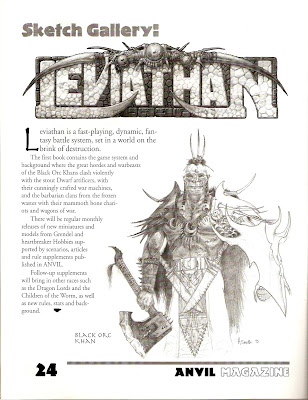 Look at the Black Orc Khan! I love the style of the guy, with his bone armour and vague native American vibe which is really different from the typical Orc style, and indeed the final visuals that Grendel went with. 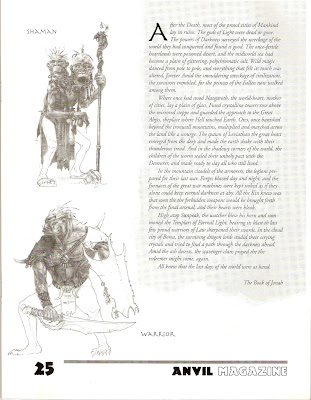 A two headed Orc Shaman and spiny Orc warrior also reinforces the post apocalyptic setting where magical pollution and a cataclysmic war has seen mutation and degeneration of the surviving populace.

The final piece of artwork previewed was the Goblins and some warbeasts: 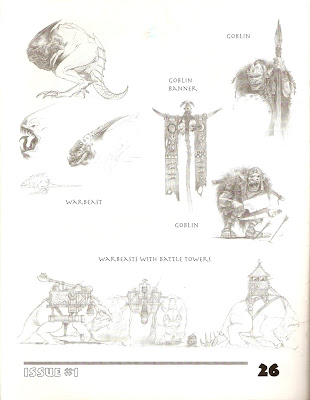 Ironically, the Goblin artwork is rather closer to the more traditional view of Goblins than how the final release portrayed them. I'm more struck by the Orc and Goblin warbeasts, huge scaly lizards with lots of teeth and toting impressive howdahs and artillery pieces.

It almost feels like the game was trying to go in two directions at this stage with the infantry being really characterful and the background hinting towards small groups of warriors fighting for survival while the artwork for the warbeasts point towards something a bit more epic in scale.

I've always felt that Leviathan could have been split into two seperate games, one concentrating on small warbands and the other going for the grand spectacle with hordes of infantry and engines of destruction, possibly in a different scale.

Either which way, Leviathan came out in 1995 and was a bit of an amalgamation of the two ideas but I've yet to speak to anyone who actually played it which is a real shame.

My plan is to put together rules for all the stuff that Grendel created sculpts for such as the Warbisons, MK2 Wargolems, Vortex Spell Eaters and Fallen Lords to round out the game as well as putting together magic and flyer rules and finally retweak the original rules to cover the odds and ends that were missed out (Tail Spikes!).

I'll post up the first new units in the next day or so and hope to add some playtest rules too so watch this space!
Posted by Leutenant Brittan at 13:47