Here's the first of my Dwarven infantry for my Leviathan project: 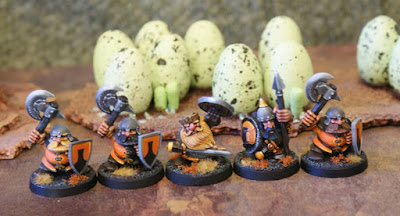 They are a selection of Citadel plastics, Marauder and Heartbreaker miniatures and I really enjoyed painting them in a non metallic style which seems to work rather well with these old sculpts. I will be using a similar technique on all my Leviathan stuff as I've found the results, while rather time consuming, to be really effective.

I decided to go for a rather more bright orange than the usual reds and blues for my Dwarves as the few pieces of Leviathan artwork that were produced show them in rather bright colours and I think it works rather well and it's going to be interesting to see what they look like alongside their battletanks and wargolems!

Looking in my bits box, I have enough for a decent sized unit of axemen as well as a handful of crossbows and spearmen. Once I have them all painted, I'll be placing a small order with Ral Partha Europe for some more of the Heartbreaker Dwarves to complete my infantry before moving onto some war engines.

Hopefully I'll be able to post another update in the next week or so but in the meantime, All the best!
Posted by Leutenant Brittan at 01:01