Issue two of Forge Magazine saw two articles on Leviathan featured. The first showcases two dragons and the cover artwork for the rulebook: 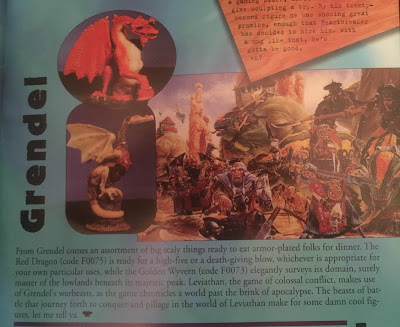 On a personal note, I'm rather keen to pick up both the Red Dragon and Golden Wyvern for my collection in the coming months but it's great to see some painted samples of the big resin beasts. The Red Dragon would make a great addition to the Elven warhost while the Wyvern is just such a lovely looking beast!

Next up, they also feature a short story, The Battle of Axebite Pass alongside some more artwork for the game. 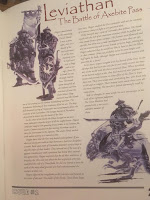 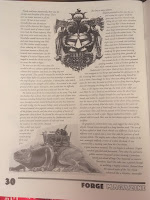 The Battle of Axebite Pass

The Battle between the Dwarven army and Orcish horde is really evocative, especially as the Axebite pass is one of the great strategic locations on Aeroth and is written by Bill King, the same chap who brought us Felix and Gotrek of Warhammer fame.

It's a great story and can be found in the Leviathan rulebook and is well worth a read to give a flavour of the world and its inhabitants as well as the way that two of the armies operate. The Dwarves are shown as a defensive force with emplaced artillery, stalwart infantry and the massed sounding of steam whistles as a challenge to the Orcs from their tanks is rather good.

Similarly, the Orcs are fleshed out in all their barbaric glory, their seemingly savage appearance and surprisingly advanced tactics. Their chanting of Gorath as they weather the fire of the Dwarven artillery is really fascinating to read as is the appearance of Dwarven suicide troops!

While the story can be seen in the rulebook as can most of the artwork, this guy is to my knowledge, only ever featured in this one article: 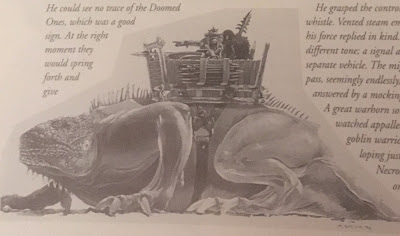 It's a Necrosaur featuring a bolt thrower or harpoon and gives a sense of the scale that Grendel was going for with the game. I find it fascinating to see the concepts of Leviathan taking shape and would have loved to see more of the games development.

Next up, I'll cover the last two specifically Leviathan articles that can be found in Forge before covering some miniature reviews from the long defunct Arcane Magazine!

In the meantime, all the best!
Posted by Leutenant Brittan at 11:12