Following the brief appearance of Leviathan preview articles in Anvil back in 1994, it's successor, Forge appeared soon after and over the next couple of posts I'll cover the assorted articles covering Grendel's Leviathan miniatures.

First off, there's some Black Orcs showcased as part of a painting guide:

While the article is pretty straight forward, I do like the finish of these guys as their dark blue/grey/purple tinted skin is a nice departure from the more typical greens of the period. Interestingly, Leviathan's release saw the Orcish skin tone change to a rusty reddish brown. 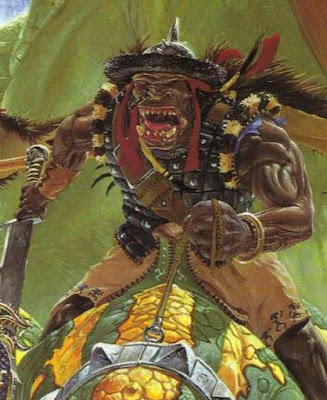 Sculpted by Kev Adams, sadly the resin Orcs aren't available anymore which is a bit of a shame as they've got quite a lot of character and I'd love to add them to my collection if I can source them at some point in the future.

Grendel also released a pack of Human Barbarians at the same time which I'll cover in a future article as the resin infantry are rather good and were an affordable way to build infantry units.

I may use the darker skin tone for some of Gorath's Chosen and wouldn't mind exploring some other unusual skin tones for my Orcs, possibly by making use of warpaints and tattoos to give them a suitably dangerous and savage look!

I'll post up another article in the morning with some more Leviathan related goodness but in the meantime, All the best!
Posted by Leutenant Brittan at 16:03