I've been trawling through my old posts to put together some of the pics of the painted Leviathan stuff from my previous project to give people an idea of what the range actually looks like with a coat of paint.

First off, here's the mighty Titanosauer, the largest of the Orc Warbeasts: 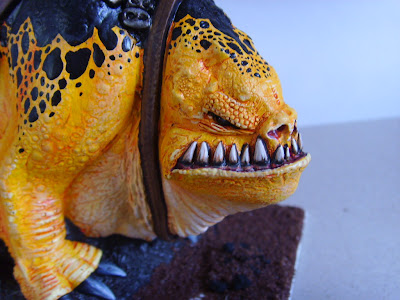 Back in 2011, I had a fantastic time painting up the beast, which is absolutely massive and towers suitably over the lesser creatures the Horde. 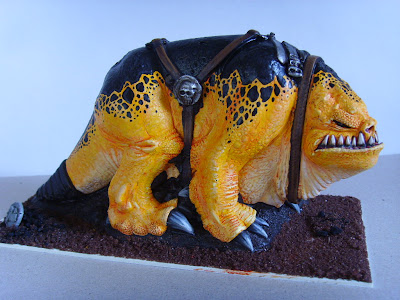 I plan on getting this kit again as it really makes for a fantastic centrepiece to any Orc horde and us just the thing to allow ones Khan to ride around in style. 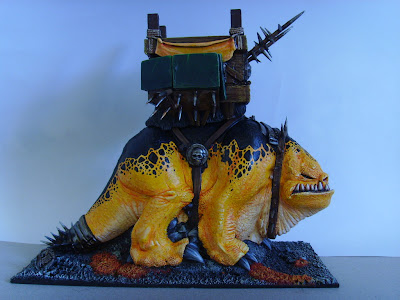 I converted this sculpt a bit to add Tail Spikes, an upgrade all Orc Warbeasts can take (annoyingly it doesn't actually say what they do in the book, something I am looking to resolve this time around!)

Similarly, the howdah itself has been bulked out a bit to allow for the four crew the beast is supposed to have as the original is a bit on the teeny side so I built two extra platforms for the archers to ride around in. 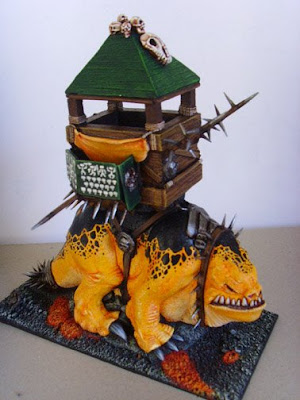 The Completed Beast, Minus Crew

The second large warbeast I got was a Necrosaur with Harpoon: 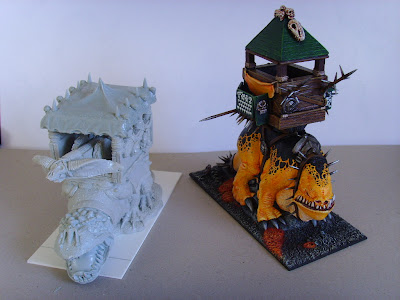 Unpainted Necrosaur next to the Titanosaur

The second largest of the Warbeasts, the Necrosaur can either be fielded with a howdah full of Orcs or mounting a large harpoon which is one of only two artillery options for the Orcs. 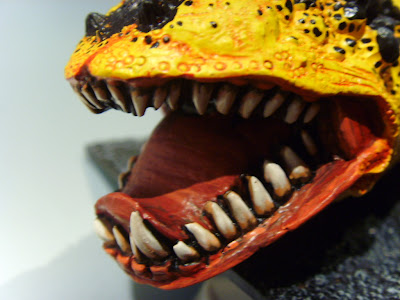 Like the Titanosaur, the Necrosaur was a pleasure to paint, with enough realistic skin details to make it look good without being too fussy. 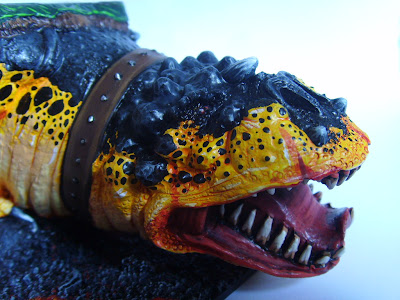 Side by side, you can see how intimidating the two look and if you were to field a complete Orc horde with all the smaller warbeasts, one can start to imagine just how spectacular they would look! 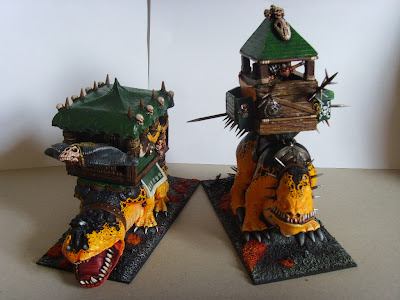 I believe I still have the Orc Necrosaur in my collection somewhere and will need to dust him off and add a few tweaks to his paintjob to bring him up to date with my current paint style. As I don't currently have any crew for him so will need to find some Orcish artillery types who can get pressed into service.

Sadly the last of the Orc warbeasts I managed to paint last time round was a heavily converted Lesser Goblin Warbeast: 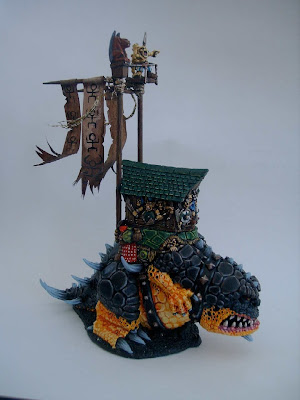 This is about the only original warbeast I picked up from Macs Models back in the day for Leviathan, and I had originally painted it a naff green but due to a casting defect and my shoddy teenage painting skills, I had abandoned it in a box for over a decade before I finally fixed him.

I actually still have this model, minus the back banner which broke during one of my house moves so he will get repaired and added back to my Leviathan collection soon! 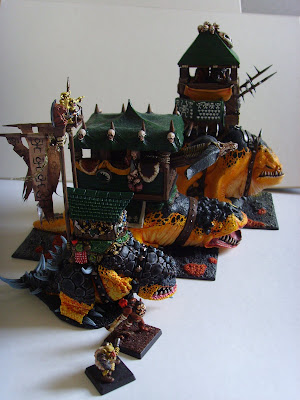 Looking back, I really wish I had persevered with this project rather than letting it lie fallow for so long as the visual spectacle of the vast warbeasts supported by hordes of infantry is pretty compelling.

I've also trawled the interwebs for pics of the elusive Leviathan range and have found some, including some that were originally featured in Forge Magazine, a short lived but fascinating gaming publication. 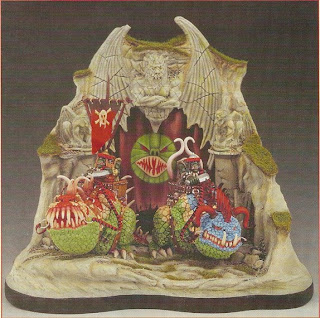 I find myself struck by the relatively few images of painted figures from the Leviathan range as there's some really interesting figures to be found amongst it but it appears that relatively few folks showed much interest in the game and a lack of support (I'm looking at you Earthpower!) seems to have left Leviathan as a bit of a forgotten game. 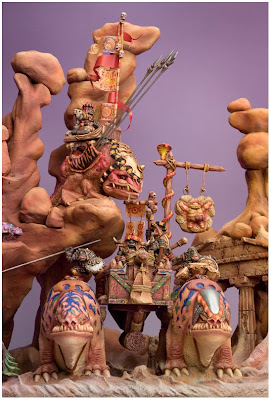 I doubt there's much I can do about this, other than to simply crack on with putting my collection together to be honest. The last time I tried this project, I got really disheartened by the lack of interest in the game and the fact that although it's still in production, there haven't really been any releases for it in about twenty years.

This time around, I am just going to concentrate on enjoying the experience of painting and converting the figures rather than wailing and gnashing my teeth about it and if it means I get some enjoyment out of my hobby, that's the main thing! 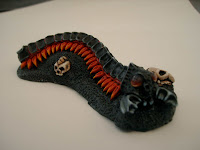 I am planning to put together a complete collection of the Leviathan range over the coming years as despite the somewhat odd proportions and limitations of the casts, I do like them and want to remember what was for me an inspirational game.

I must admit that I have no idea how long it will take to do but I plan on enjoying myself doing so and if I do get a game or two out of the experience, all the better! 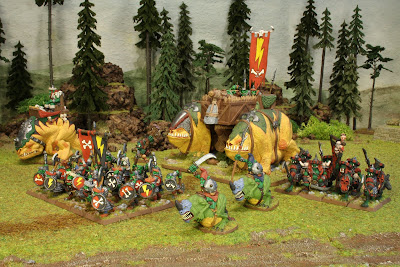 At the same time, I do hope to add the odd addition to my collection from other ranges that have suitable figures. Companies such as Ramshackle Games produce quite a few pieces which would fit right in with the aesthetic and some of the old Heartbreaker figures that are still available from Ral Partha Europe will be supplying me with all manner of infantry to add to my collection. 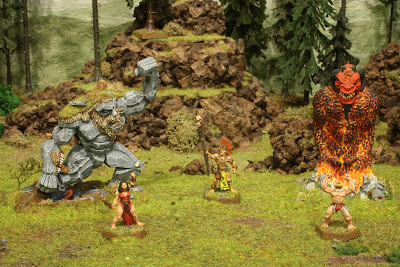 I am also interested in hearing from the original game developers or anyone who has painted some of the figures or shock horror, actually played a game so do get in touch if you are any of the above! 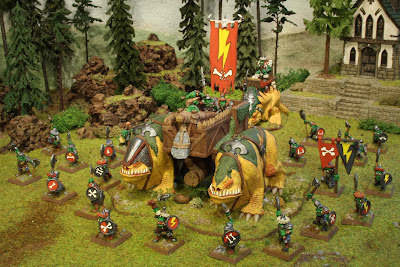 In some ways it's a shame that Leviathan never really took off as it has some great concepts and the world is so rich for exploration. Imagine what using modern sculpting techniques could do for the range!

In hindsight, I do feel that Leviathan in 28mm scale is more suited to skirmishing with small infantry forces supported by the odd warbeast would have been the way to go. Look at Chronopia, the spiritual successor to Leviathan for example. It had much of the same creative team but concentrated on infantry combat over massed battles.

I suspect that a 15mm version would allow for all the detail but much more of a visual spectacle without needing a vast playing area but that ramble is for another day. 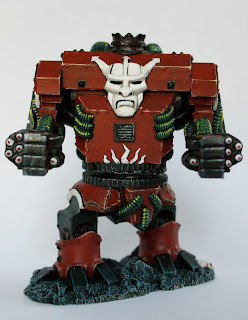 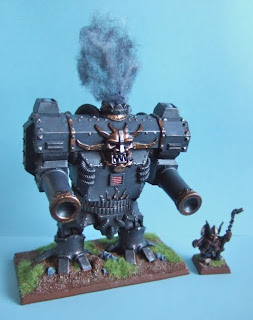 I hope to add some new pictures in the coming week of newly painted additions to my collection as well as further explorations of the setting, its inhabitants and reviews too but in the meantime, All the best!
Posted by Leutenant Brittan at 00:43