The Armies of Leviathan: The Dwarves

I thought I'd get the ball rolling with an exploration of the assorted forces that can be found on Aeroth and I'll be starting with the Dwarves.

The Dwarves are a technologically advanced race that was once subservient to the Elves but fought for their freedom and following The Death, have begun developing new warmachines to aid them in their exploration of the post apocalyptic world they find themselves in. 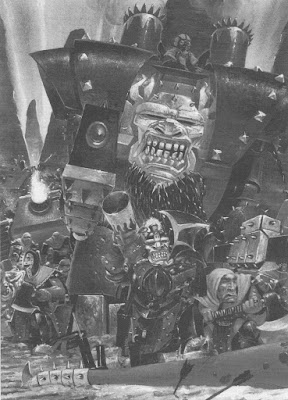 The Battle For Axebite Pass

Living in great mountain fastnesses, the Dwarves survived The Death almost unscathed with only a few smaller holds being destroyed in volcanic eruptions, earthquakes or attacks from The Fallen but as supplies run low or are spoiled by the thick smoke of industry, they have been forced to unlock their Titan Gates and deploy expeditions out into the wastelands. 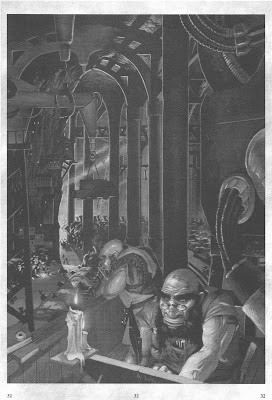 The Dwarven armed forces are led by the Order of the Axe, a corps of trained officers who have dedicated their lives to the art of war. Game wise, they are amongst the toughest characters in the game, with astonishingly high toughness and exceedingly good combat rating, combined with heavy armour and their tenancy to ride around in battletanks, they are a force to be reckoned with. 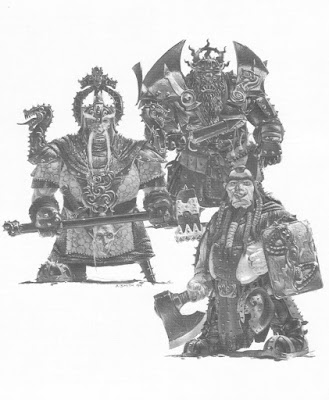 Order of the Axe, Technomancer and Champion

The other characters available to the Dwarves are the Technomancer, a master engineer capable of wielding all manner of high tech and devastating weapons ranging from flame throwers to rockets.

The final choice available is the Alchemist, a somewhat secretive and mistrusted individual who has access to alchemical devices of destruction. 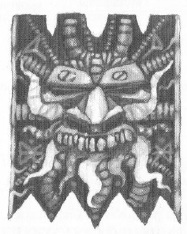 The core of any Dwarven force are the Guard units, well trained and equipped regulars, their slow movement is offset by their high toughness and excellent combat rating. Armed with a wide variety of weapons ranging from axes to polearms, crossbows and blunderbusses, Guards can also be equipped with pavises to protect them from enemy fire.

The elite Dwarven infantry are Ironhammers, veteran troops with better combat skills than Guards. While limited in numbers, they form a rock hard core to any Dwarven force.

The final infantry choice are the Oathbreakers, Dwarves who have commited the terrible crime of breaking their word and seek to atone for their crimes by carrying explosive packs into battle with the aim of taking out as many of their foes as they can in the resulting blast. 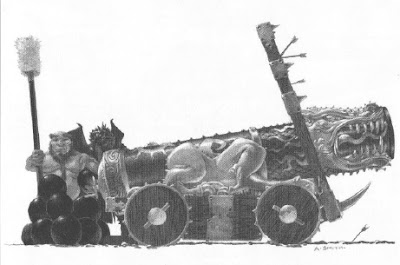 The Dwarves have the widest selection of artillery available to any of the races and can deliver huge amounts of damage at extreme ranges which makes up for the Dwarves slow movement and when used correctly, can seriously whittle down attacking forces before they get close enough to respond.

Multi Barrelled Grenade Launcher: A relatively short ranged weapon designed to saturate the area with a hail of explosive grenades.

Mortar: A long range weapon that lobs a large shell indirectly at a target before exploding. Great for blowing up large units of infantry and small warbeasts.

Hydra: A smaller artillery piece that can fire between one and four barrels at once. Handy for taking on infantry and cavalry but has a tendency of exploding spectacularly when it misfires.

The Dwarves are unique amongst the races in that they have access to field fortifications thanks to the Order of the Tower, an engineering force that will erect emplacements before battle. These range from Mantlets, a defensive screen to protect artillery from incoming fire and Artillery Spotter Positions which gives a designated artillery piece an improved targeting roll. 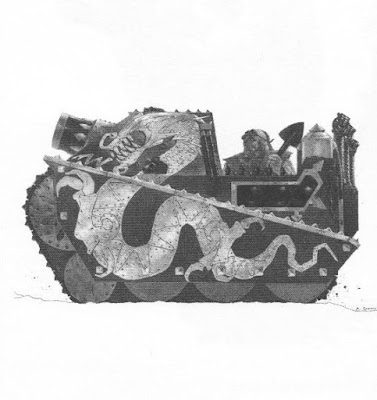 In keeping with their engineering prowess, the Dwarves field an impressive selection of war engines. Their battletanks grind forward slowly to engage enemy forces with their impressive firepower while the Wargolems thunder forward on their sturdy legs before charging into combat, great steam powered weapons swinging.

Thunderhammer: One of the most commonly encountered battletanks, the Thunderhammer is equipped with a grapeshot mortar allowing it to engage enemy formations at short range. The use of a large template means that infantry and cavalry as well as smaller warbeasts should fear being targeted by this tank. It's main weakness is the fixed mount for the cannon allowing nimble foes to keep out of it's arc of fire.

Iron Drake: The cheapest of the Dwarven battletanks, the Iron Drake mounts a heavy flamethrower. specialising in engaging infantry and cavalry, the Iron Drake is a dangerous opponent but needs to get close to enemy troops to be effective and may find itself swamped if their targets avoid their flamethrower.

Rapier: A specialised tank, the Rapier is armed with a harpoon which it uses to hook enemy warbeasts and drag them forward into range of Wargolems.

Ironclad: The largest and most powerful tank in the Dwarven arsenal, the Ironclad is armed with a battlecannon mounted in a turret and a forward firing multi-launcher. This behemoth is capable of engaging any foe at range, it's turret capable of blasting even a Titanosaur to paste in a single shot while the multi-launcher excels at pinning down infantry and cavalry. 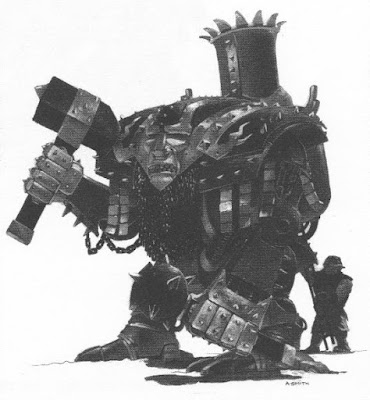 Wargolem: The fastest moving choice amongst the Dwarven army, the Wargolems are large walkers armed with a fearsome warhammer and mace. When charging, they can lower their shoulders and perform a highly destructive shoulder barge.

In game, they are great for moving forward to harry opponents or to keep close to the Dwarven battle line to engage weakened targets that have survived an artillery barrage.

I've played a couple of games of Leviathan now and have found that the infantry are best suited to a defensive role, protecting the artillery batteries from marauding cavalry and allowing them to engage enemy warbeasts.

The Dwarven warengines are also essentially mobile artillery pieces which are slow moving which are best suited to working in pairs to overcome their  limited fire arcs. Battletanks need to take care when closing with enemy infantry as their crew can be overwhelmed by their foes so keeping them close to infantry is always a good idea.

Wargolems are natural fire magnets. Their intimidating size, combined with speed and combat prowess results in opponents concentrating on immobilising them, sometimes at the expense of targeting more valuable units like artillery.

I  hope to play some more games soon and post some battle reports, initially using tokens to allow me to get to grips with the system and work out any kinks. I plan on using as many different force builds as I can to try out different tactics to see what works the best and if any of the units are over or underpowered.

At first glance, the Dwarves are the most powerful of forces as they have such amazing amounts of firepower to lob at foes as well as very sturdy infantry and some specialised warengines that can engage even large opponents. Their main weakness is their low mobility and relatively limited numbers so a mobile foe, such as the Elves or a numerous one like the Orcs can exploit this to their advantage.

I must admit that I have found myself re-energised about all things Leviathan and look forward to trying out some games as well as exploring the background of the world itself!

Posted by Leutenant Brittan at 02:02