Alas I didnt get much done today but have stated work on my lesser goblin wartower. Thus far its more a case of fixing the air bubbles but hopefully over the next couple of days I will be able to add his armoured hide and other assorted goodness! 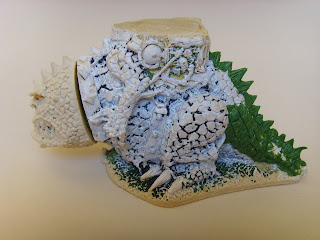 The next step will be to start adding some larger scales and some armoured patches!

All the best!
Posted by Leutenant Brittan at 13:36 No comments:

Well the model has been sat soaking in Mr Muscle oven cleaner for hours and Ive had at it with a toothbrush to remove as much loose paint as possible: 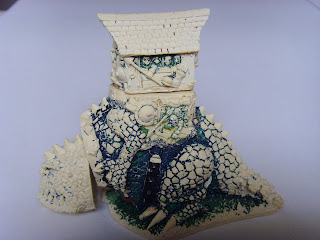 Ive noticed theres a bit of an air bubble problem on the carnosaur as his spines are missing their tips and a large chunk of his tail is missing altogether! This isnt too much of a problem as hes going to be getting a fairly hefty amount of conversion work done to him. 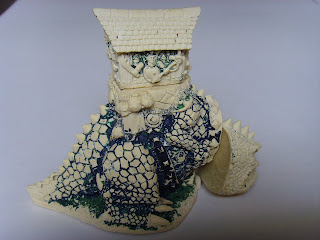 The paint has come off the surface of the model quite well but the carnosaur has some really deep crevices in its skin making cleaning a bit of a pain! Ive stuck him back in the cleaner and will leave him till this evening and then have another go at cleaning the remainder off.

At present I am planning on lengthening his tail and adding some spikes and possibly even some armour plates (I really want to have a go at making him a spiny devil, covered in armour and spikes. These will be a mixture of his natural hide and riveted pieces of plate added by the lesser goblins) Another possibility is to lengthen his jaw a bit making him a bit more predatory.

The howdah itself will have a suitably large banner pole, crows nest and hopefully some extra bits and pieces to help identify it as a command unit.

I will get some thumbnails worked up and will post them along with an update of the cleaning process in the morning!

All the best!
Posted by Leutenant Brittan at 05:32 No comments:

Ive been having a rummage in my parents loft and have found an old Leviathan lesser goblin wartower I painted when I was about 16. Needless to say it looks pretty poor so I thought as the poll I am running is hinting that people would like to see a lesser goblin wartower painted up this would be the perfect time to start! 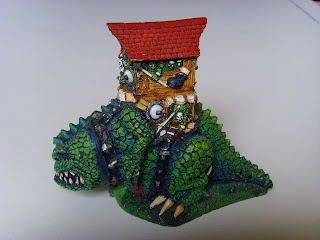 I plan on converting this chap a bit once Ive stripped off the paint and turning him into a command unit for my wartowers. Ive found an assortment of useful material ranging from cocktail sticks to balsa wood and plasticard in the same box and will be posting my progress while Im up here in Scotland! 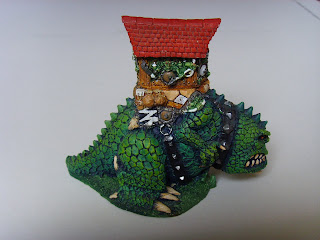 The first stage is going to be stripping the paint off him. As Im not sure what effect paint stripper will have on him I am going to attempt to use Mr Muscle Oven Cleaner which I have been informed will do the job (if somewhat more slowly as it will take a couple of days to lift the paint)

As this is the first Grendel miniature I ever bought I plan on spending a bit of time on him making him look as good as possible and he may form the basis for a small sub force I have been pondering (Essentially a horde of lesser goblins consisting of nothing but wartowers and lesser goblin rabbles!) I may have to add some troop choices in but I quite like the idea of a horde of diminutive goblins rushing around causing mayhem!

Hopefully I will be able to show a stripped version of the model by the weekend!

All the best!
Posted by Leutenant Brittan at 08:11 No comments:

I've had to make an unexpected visit to my parents which means I cant get any painting done for a bit but have found that an order I placed on ebay for some MK2 War Golems has arrived here so have decided to write a review of them!

So without further ado heres the MK2 War Golem Black Thunder. The kit arrived in a big blister pack and I was very pleased to find that despite having been shipped to the US at some point and then back here, the model is in perfect condition! The only defect in it is a small bubble on one shoulder but it makes the machine look like its taken a glancing blow in battle and actually looks quite good. 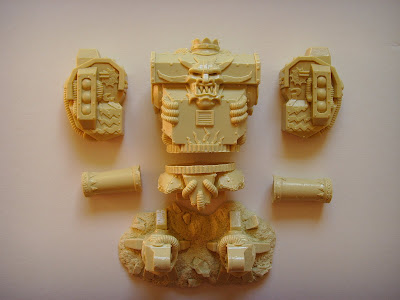 The kit itself comes in seven pieces, the main body, hips, legs, both arms and the cannon barrels. First off its worth mentioning the detailing on the model is excellent. Of special note is the external ammo hoppers on the arms and even the cannon barrels have some nice work on them! 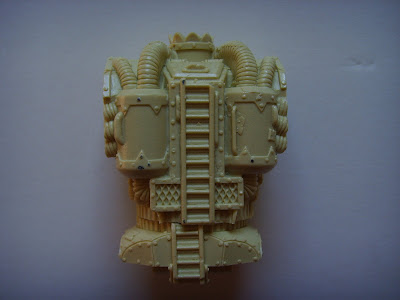 The rear of the model even has some nice bits on it including a retractable ladder allowing the crew access to the cabin.

This has thus far been one of the best kits I've got from the Leviathan range and I can see myself fielding large numbers of golems in my dwarf army. It's a far better kit than the MK1 war golem which suffers from tons of flash and a generally unlovely look.

I Intend to try using the MK1 arms with their hammer and mace on MK2 bodies to represent MK1 golems! (It's also worth noting that the MK1 is slightly larger than the MK2 and once I'm back in Worcester I will take some comparison pics)

Next off is the Mk2 War Golem Firestorm Its another nice kit which comes in five pieces, the body, hips legs and both arms. This is a nice fire support beast armed with rocket launchers and while not quite as impressive looking as the Black Thunder is also nicely done.

Like the Black Thunder it has the same legs and hips and the body is similar enough to make swapping parts easy. It's also in really nice condition and has only a couple of nicks in the resin. 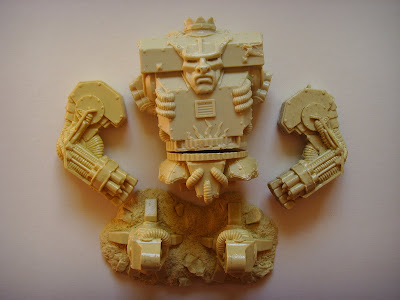 As it's got lots of exposed piping on its arms I suspect its rules will have to show it having a lower armour level than some of the other golems but as it's a fire support unit that doesn't really matter! On a side note any 40k player could use the MK2 golems as space marine dreadnoughts as they are suitably boxy and quite gothic looking (they are however twice the size and less than half the cost!) 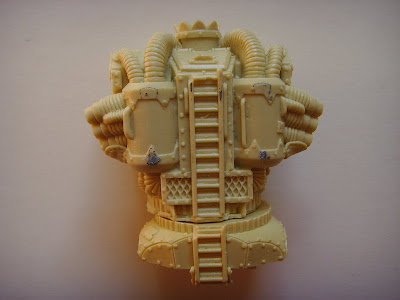 The boiler on the firestorm seems to have some sort of supercharger as there's a ton of extra exhaust pipes emerging from it which looks really nice (I may add a new ability to it when I write up its rules allowing for an extra burst of speed!)

All in all I am really pleased with both the kits and am now looking forward to finishing my Orc horde so I can start work on my dwarves!

All the best!
Posted by Leutenant Brittan at 01:34 No comments: